Family history brings the inevitability of questioning your roots, and todays custom is to sign up to a popular genealogy website, pay a fee, send off a sample of bodily fluid, and eventually receive a glossy printout informing you that you’re probably descended from apes in the African rift valley.

My journey has been less forensically led; mostly based on the tales handed out by Mum and Dad, and padded out by scratching about on the internet and rooting through old photos. The only purpose of it all to write it down before it really is too late, and to give the grandkids something to look at.

Our shadows pass quickly: blown like clouds across the East Anglian landscape, but other shadows are long.

I was running out of material, but a remaining great grandfather sat there in the files waiting for me to get my finger out. Shadows pass quickly indeed.

The first attempts to unravel the history followed the Cole line. We were quickly traced from East Harling, West Harling and Bridgham – back along the Little Ouse river, and down the Waveney valley to the villages on the Norfolk/Suffolk border near Lowestoft. There’s a foray into Norwich in the early 1700’s, but (disappointingly for Dad) the roots clearly turn south into Suffolk. It’s unconfirmed, but those roots are dipped into the sea in the vanishing village of Covehithe while Elizabeth I was Queen. There the trail ends.

But all is not lost. You’ll see from my other blogs that the name Burlingham is prominent; and as Norfolk names go, Burlingham is as deep a taproot as you can find. Put the name into Google and you’ll see that lots of research plants it originally in the village of what became Burlingham near Acle. ‘Byrla’ or ‘Birlas’ people would have been Anglo Saxon, and chose ‘Nordfolc’ as a new horizon 1500 years ago. The Burlingham name, is even now, most strongly rooted here in Norfolk census records.

Unfortunately for me, this is where life gets complicated. Great grandfather George Burlingham (on the paternal side of the tree – don’t ask!) was born in Harling, but his parental line is unknown. The smoke leads to the village of Snetterton, but there’s no obvious fire. Snetterton, is however, full of Burlinghams. In fact, throw a stone in any direction there and you’ll find traces of my family: Burlingham, Crook, Cole, Saunders. The swathe of parishes from Harling up past Attleborough towards Wymondham are the fertile lands from which the subject of this blog gains it’s story.

Ben Saunders was my maternal great grandfather, and born in May 1881 at Snetterton. Mum has long told me that Ben had been born and raised as a Burlingham, but the story goes that his grandmother told him before his wedding day that he was in fact a Saunders, because she couldn’t allow him to marry under a lie (Bens mother Caroline was born out of wedlock before her parents married). The other part of the story is that Ben was fathered by an Irish traveller, but that’s a mystery lost in the fog of social correctness of the time. In any case, Ben was raised with the nickname ‘Murphy’ as a result. It’d be brilliant if we knew more of the traveller lineage.

I’m sure great grandma Nellie (Ellen Augusta Woods) wasn’t surprised at all to have her big day end with an unplanned name change. She seems a trusting type. After all, apparently when Ben wanted his wicked way with Nellie, he convinced her everything would be ok ‘because his aunt was a nurse.’ She clearly trusted him, because they went on to have eight children, including my grandmother Lil.

Like Burlingham, Saunders too is an ancient name, but with much less clear origins. ‘Of Alexander’ or Alexander became anglicised by Saxon- Normans into ‘Sandhres’ and Saunders, but the roots are too unclear to speculate.

There are so many crossovers between Burlingham and Saunders on both sides of my family I’ve not tried to make sense of where Hannah Saunders originated from – so make of this what you will, but she wasn’t married to Jeremiah when Caroline was born.

An unmarried Caroline would have been aged around 19 when Ben arrived. She was later in service in Ketteringham, and in 1894 married Henry Lansdale, son of her master when Ben was aged around 13. He was apparently shipped off to live with his grandparents Jeremiah and Hannah in Snetterton, but I have no details of the exact arrangements of his upbringing (Caroline took her own life in early 1915 by drowning). 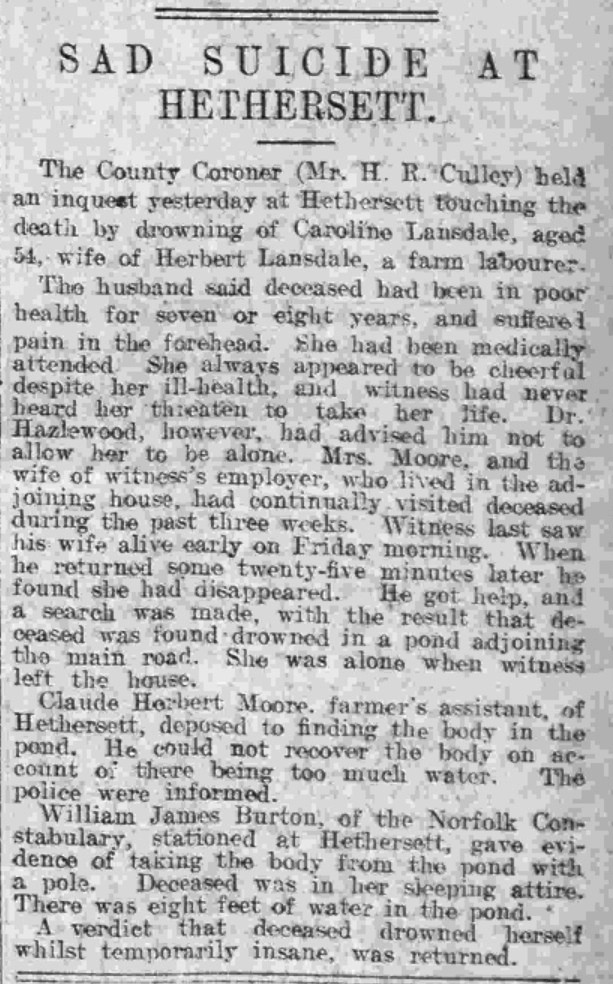 In any case, by 1911, Ben was a married man, a horseman living at Plainwood Farm, Hethersett (it’s now derelict and known as Planet Farm) with a young family, and had become Ben Saunders. My mum speaks fondly of Ben and Nellie. As straight as a die, he was a bit of a poacher, but worked his horses on the land in the villages around Wymondham. Apparently he was a lovely old boy.

Pick a census for 1891 in Carleton Forehoe or 1901 for Wicklewood and you’ll find John and Annie Saunders (Annie was widowed in 1891), bringing up their six children, including Arthur (born 1884) and John (1892, shortly after the death of his father). Arthur and John were cousins to Ben. All interwoven by blood and farming, but soon to be cast asunder just as farm boys would cast the grain on the spring soil.

1914 brought war to Norfolk farms, and although the call to arms in August of that year was keenly answered, harvest time meant that the men of fighting age would fulfill their duties on the land before that of King and Empire.

I’m not certain if the three cousins discussed their plans as they gathered that last harvest, or if they resolved to enlist together, but in 1915 enlist they did.

John ended up in 1/4th Battalion, The Norfolk Regiment as Private 4989, then is issued service number 201142. However, John isn’t a straight forward story.

His service records partially survived the blitz. In August 1915 his records show that he forfeited 31 days ’embodied service’ for fraudulently enlisting with the Norfolks while ‘belonging to the RFA.’ He used the name John Smith.

So maybe all three cousins did stand in line in Norwich and join the Army. Quite why John then swapped regiments by using a false name is unknown.

I don’t intend from this point to go into great detail about the war of the three comrades, but in summary, all would disembark by the autumn of 1915.

Ben would head for France on 22nd September 1915, then by early 1916 to Salonika with 26th Division Ammunition Column, then serve out the war with 99 Brigade/22 Division, and get malaria for his troubles.

Arthur would serve in France, disembarking on 12th July 1915 with 63 Brigade RFA; firing shells over the head of my other great grandfather George Burlingham who was with the 7th Norfolks, as part of 12th (Eastern) Division.

John would head for Egypt and Palestine with 163 Brigade, 54th (East Anglian) Division and the 4th Norfolks.

So briefly, what of their war?

I know no minute details of Ben’s service, other than mum had believed he was at Gallipoli, and the picture we have of him above. As stated above, he began his war as part of the 26th Division Ammunition Column and embarked from Southampton on 21st September 1915. On 29th January 1916 he embarked from Marseilles to Salonika, arriving on 8th February. A year later he was merged to 12 CAC, before being posted 99 Brigade, 22 Division on 29th June 1918. His pension records show he had recurrent malaria.

Arthur’s war was up and down the Western Front, from Ploegsteert, Loos and to the Somme and back. He would die as a result of the Battle of Arras in April 1917. More of that later.

Due to the survival of some of John’s papers we know he made it to Alexandria in Egypt in May 1916 with 163 Brigade. The record shows he was in hospital there with illness, and also fined 2 days pay for smoking where he shouldn’t have. By spring 1917 he would be in Gaza, Palestine, for the bitter fighting against the Ottoman forces.

So here we arrive at the dreadful coincidence of the story. John’s war came to a conclusion in the Second Battle of Gaza on April 19th 1917. His division was badly mauled and John died of his wounds at the 2/1 East Anglian Field Hospital the next day – April 20th 1917.

Meanwhile, hundreds of miles north, at 41st Casualty Clearing Station at Agnez Les Duisans, just west of Arras, Arthur would also die that very same day of wounds received. 12th Division had moved back from the front on 13th April, but the artillery of 63 Brigade RFA had remained there as they assaulted the lines near Monchy le Preux. A crushingly poignant coincidence that two brothers should die on the same day, on different continents.

Above are the remaining papers of John’s service file. He may have gotten off on the wrong foot with the army by switching names, and getting caught smoking is a bit daft, but he probably had a rough time of it in the dreadful conditions of Egypt and Palestine. Certainly, his was a rough war in an alien environment.

The papers list the correspondence over his affairs, and reference that his brother Charles would receive his medals on behalf of his brother Walter who was by 1921 a resident of Thorpe Asylum (St Andrews Hospital). I know that in 1911, Walter was a farm labourer lodging at Hackford. What troubles me is the thought of Walter suffering a mental breakdown as a result of losing two brothers in one day. I can only imagine the effect on the family when receiving those telegrams. Walter would never recover, spending his life in the asylum, and died in 1953.

The final document is the Imperial Service Obligation. John signed up and agreed to fight overseas. He could have declined and served at home until the urgent drafts followed in 1916.

And that’s what compels me to remember these men. Farmers, and in the case of Benjamin and Arthur family men too. Leading quiet, hard lives on the land, yet in the moment of need, they answered the call. Three cousins, united in service and, for two brothers, also, in death.

John is buried in Gaza.

Both are commemorated at the top of the panel on Wymondham War memorial.

Ben would pass in 1960, and Nellie in 1965. I don’t remember my great grandmother, and Ben was gone before I arrived, but they are remembered with fondness.

In a late twist to the story, battlefield historian, and mate, Steve Smith, connected with a man called Ibrahim Jaradah jr, who works for the Commonwealth War Graves Commission in Gaza. Ibrahim’s late grandfather Ibrahim sr, had tended the cemetery for 60 years prior to his death in 2017. Today Ibrahim took the trouble to send me a picture of John’s final resting place. As a tribute I include a picture of Ibrahim Jaradah MBE. 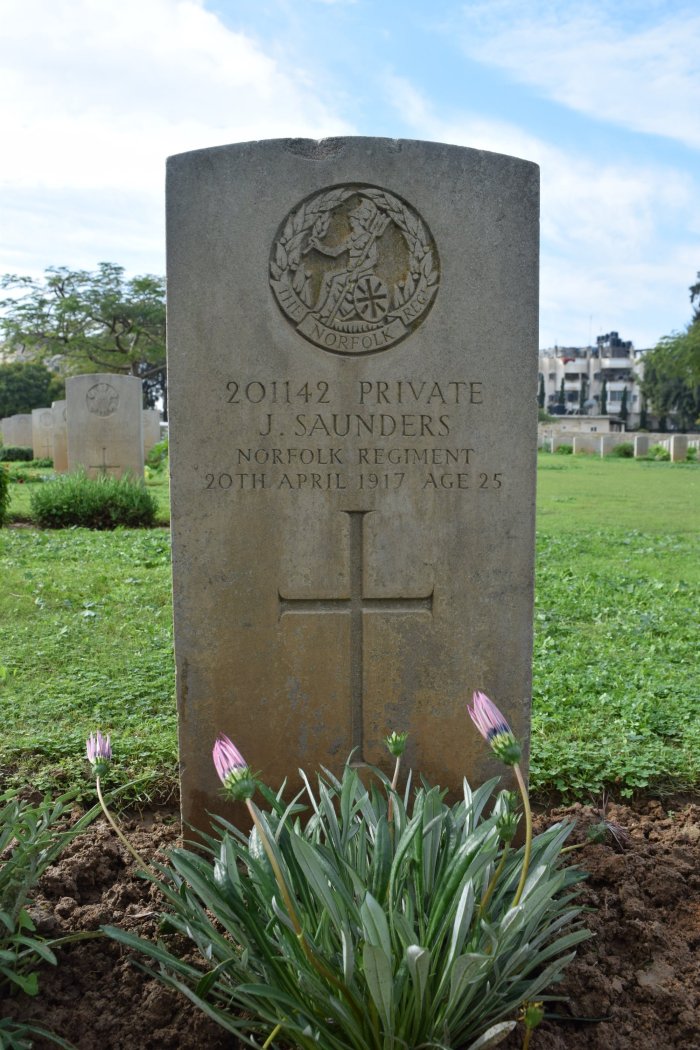 I’m glad that Ben Saunders survived, because without him, I wouldn’t be here. I’m thankful for his service and the love that my mum has for the memory of him. I’m thankful too for the clue provided by Steve Smith that caused me to make the family link to history that would have otherwise been undiscovered. And I’m thankful also for men like Ibrahim and his grandfather for tending those waiting silently to be remembered.

What began with an interest in the wartime adventures of great grandfathers and great uncles became a journey across the old British Empire. Maybe more than just one blog? View all posts by Farmboys & Pioneers

2 thoughts on “The Last Harvest”